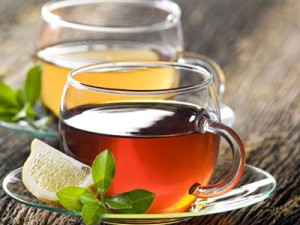 Green Tea: Does not get fermented. The leaves go through three processes: baking, wrapping and fire. The first aims to kill the enzymes that would cause fermentation. This is achieved by abrupt warming up the leaves at 100 ° C. The leaves soften and can easily be bent or folded by hand to get the shape of small balls or branch. Finally, dried in hot air until the leaves do not keep more than 5-6% moisture.

Wu Long: In these teas the fermentation process is stopped in the middle. In mature leaves, which therefore contain less tannin and caffeine, are used for this category. Are specialties of Fujian province in China and Taiwan.

White Tea: The most delicate tea that actually is in its natural state. The leaves wither after heated in hot air and finally are dried in large pans for about half an hour.

Black Tea: Here the fermentation process is completed. A legend says that in the 17th century a load of green tea from China arrived in London after a very long journey and under not very good conditions. The tea, was initially green, and became black and the English, who were not very good connoisseurs of tea, passed it for normal, liked it and ordered the same again…

The tea leaves are spread on hot air, then rolled and then passed to rooms with high humidity, where begins the process of fermentation. After baked at very high temperature and finally divided into two categories: The crushed leaves and the whole.

Smoked Tea: Smoked is black tea. A Chinese story goes back to 1820 and in Fujian province, where the army had requisitioned a plantation. The owner of the plantation, was asked to empty a warehouse where his tea was dried, a large amount of wet leaves was found and in order not to lose it, he decided immediately to dry them in a fire. The leaves got a very specific smoky flavor. Some time later a merchant who was passing by the area tested randomly some tea, was impressed by the flavors and took it with him to Europe, where he had great success.

Dark Tea: Is called Pu Er tea and is made from non-enzymatic fermentation, that is different from the one in the black tea. It has less caffeine and is the only tea that improves over time.