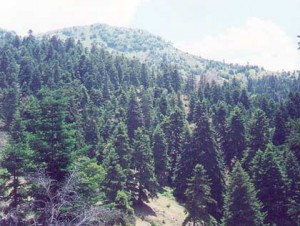 Othris the mountain of the Titans, rises in the southwest side of Magnesia, whose ridge separates from the borders of Fthiotida. In the battle for the victory of Zeus in the world of gods and humans, known in mythology as the battle of the Titans, Titans had Othrys as a base. It was the base from where they fought against Zeus and defended Saturn,  fighting to stay in the domination of the world. Eventually Zeus with the help of the Cyclops and lightning will gain the throne of Olympus, will disarm them and capture them, imprisoning them forever to Tartarus, the underworld.

When descended from the ark Deucalion and Pyrrha under command of Zeus, began to throw stones behind them. The stones thrown by Deucalion became men and those who threw Pyrrha transformed into women. According to legend, the first son of Deucalion and Pyrrha, Hellenas, was paired with the nymph Othryida and their descendants are the Greeks.

From this nymph might have occurred and the mountain’s name. According to one version, which might be the most prevalent after the battle of the Titans, Zeus, king of the gods, assigned Othryida nymph (Othriida) to graze herds that mainly consisted of oxen. So the mountain got its name from the nymph.

This mountain was inhabited from ancient times by the first greek groups, the Pelasgians. When in the area appeared Aeolians, Pelasgians fled to the islands of Aegean and the coast of Asia Minor. The same route will follow the Aeolians with the Dorian invasion. Dozens of archaeological sites testify the intense and continuous presence and action of people. There are several ancient cities located on the outskirts or higher.
During the Turkish occupation Othris was known by the name of “Goura’s mountains”, a name taken from the village of Goura, current Anavra. It was the shelter, but also the habitat and the base of greek rebels. It played a major role in the revolutionary movements of 1821, 1844, 1854 and 1878. Major battles have been given at the mountain peaks between rebels and Ottomans. Othris is suitable for landscape and adventure lovers as there are steep ravines in many places and peaks above 1,300 meters. The highest peak is Gkiouzi (1726m), the Gerakovouni (1673m), the Stratonas (1653m), the Piliouras (1557m), the Mavrika (1552m) etc. In the place Tsatali has been erected the monument of Aviators, in memory of pilots and the passengers of Air Force who died after the fall of aircraft C-130 on 05/02/1991.

The vegetation at the mountain’s foot consists mainly of olives, above there are oaks, lentisk, arbutus, friendly etc. In the higher parts thereis a magnificent forest of fir and at the top there is a creation of alpine zone with the known low herbaceous vegetation. Yet, at the “Milia” near Tsatali there is a black fir forest. The area covered by impressive old trees.