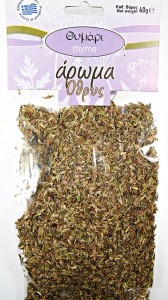 Thyme ‘Aroma Othris’ is collected from the rocky slopes of Mount Othris, in Magnesia.

The dried leaves and flowers of the plant “Thyme” or “Thimios” are a spice with a very strong aroma, rich and slightly spicy taste. Used for flavoring dishes with meat or fish and various other dishes mainly of Mediterranean cuisine.

The Ancient Greeks used this herb in their bathroom and they used to burn it in the Temples because they believed that the plant gave them physical and mental strength. The Romans, who used it as a flavoring in the rooms but also in the flavor of cheeses and beverages, helped to spread it to the rest of Europe. During the European Middle Ages, people placed sprigs of thyme under their pillows to have calm sleep without nightmares.

The decoction of thyme helps to effectively treat the symptoms of the common cold.